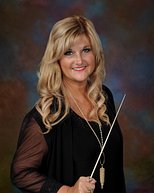 The Associate Director of Bands for Griffin Middle School is Mr. David Eakle.  Mr. Eakle has been teaching instrumental music for 27 years and came to GMS in 2008.  He received his Bachelor's of Music Education in 1992 from Oklahoma State University and his Masters of Music Education from the University of Arkansas in 2004.  Mr. Eakle began his teaching career in Stigler, Oklahoma where he served as the Assistant Band Director for 14 years.

Mr. Eakle directs the GMS Symphonic and Concert Bands and teaches beginning trumpet, trombone, and euphonium.  Under the direction of Mr. Eakle, the Symphonic Band has received the UIL Sweepstakes for Non-Varsity Bands and the Concert Band has began competing at the UIL level.  In addition, both bands have been named Outstanding Bands at DC Festivals.  He resides in Little Elm, TX.